You cannot visit Skye, and not visit the Fairy Pools. Seriously, you can’t I tell you! Not only is it a really enjoyable, easy walk, but there are so many varying waterfalls, that you will have plenty to look at.

When I went, I found the car parking to be much improved since my last visit, and I read they are still hoping to do more…planning some public toilets was one improvement I heard they were thinking about. The car park now is much larger, and can accommodate campers with no issue, and it’s so close to the beginning of the walk, that it is the perfect place to start.

I parked up and noted that the weather was yet again pretty grim looking, so wrapped up well and started on the long hike. I saw my first waterfalls straight away, but decided that I would make my way to the last one first, then photograph them as I made my way back. In hindsight, this wasn’t the best idea, as I completely underestimated just how busy this area would get as the day went on, and as I started, it was definitely quieter.. although.. actually, maybe this wasn’t the wrong decision. At the end the prettiest of the falls was still very quiet when I arrived… so I retract that last line…or at least need to add that maybe there is no ‘good’ time as such. This walk can, if you want, take you all day so my advice would be to simply plan which falls you want the most, and pick either the beginning or end of the day for those, and simply spread out the remainder for the rest of your time there.

I did stop by each fall and see what shots I might be able to get with them nonetheless. I spotted one photographer taking pictures of one, standing in such a position that I couldn’t work out how he had gotten there. I ended up assuming he had crossed the river earlier, and had come down on the other side. He would certainly get a nice shot from where he was standing, and I didn’t recognise the falls he was photographing either, so well done him, they are clearly not ones that get snapped very often! I carried on walking, seeing a few other people on the way, interested that even this early there were several groups here. At one point, where it felt as though the falls seemed to come to the end of their best ones, and I heard at least two groups say that this was probably as far as they go, turning round and going back towards the beginning. If you come here, and you haven’t seen the main attraction.. my advice here would be KEEP GOING! I now realise that these people had missed the prettiest of them all… and you really can’t miss them when you get there.

As I got to the end, I was really pleased I had gone straight there. With just one other couple there, I pretty much had the falls to myself, and was over the moon with the view. The weather, though grim, had held off, and I had had enough wherewithal to have worn Wellington boots… the plan was to walk right into the river and get that well photographed shot looking straight at the falls. River plodded happily next to me, very pleased when it came to getting our feet wet, so I just let her enjoy the water as I started to set up.

This was where I felt a little sad, and worried.. I really wanted to get one of those lovely long exposure photos, with the soft water, but without my big stopper, I was really concerned how I would best achieve the shot I hoped for. I got everything ready, and decided to look at what filters I did have, and see what I could do for the best. I still had my little stopper, so put that in the bit of holder that just about still held a filter..it did help a little, but wasn’t quite enough to darken it to the level I needed…in the end I pulled everything out, put a polariser on, held the little stopper, then ended up holding groups of everything else I had together manually in front of the lens. It looked clumsy and ridiculous, but when the shot had finally taken, I could do nothing but stare at the screen. I had never taken a shot like it….it was everything I had ever wanted in a photo. The clarity was spot on, the ominous clouds bounced across the top of the mountain behind, the water fell with such a lovely soft flow, and the light was amazing. I just kept taking more of the same. Probably no point to that, but I really wanted to keep this image! Behind me, I could see lots of blue sky coming, but this photo had nothing but the moody clouds, and they simply stayed put, giving me plenty of opportunities to get high wispy bits, or lower angrier clouds. I felt on top of the world! 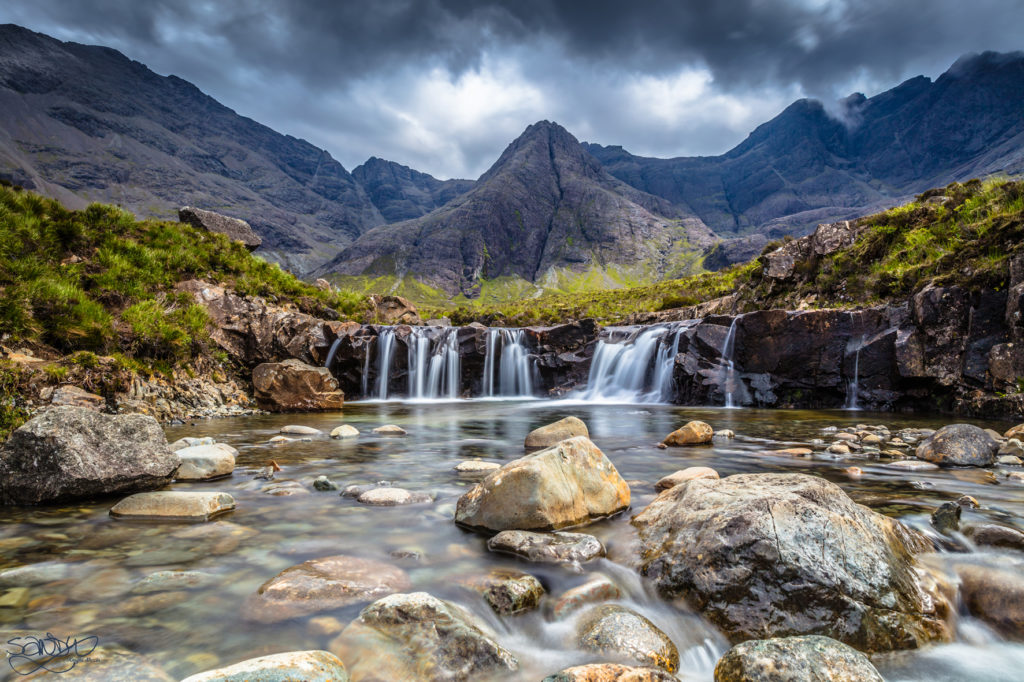 Once I had the all the shots I could get, I began the slow wander back…and as each moment passed it got hotter and hotter, as all the blue chased the cloud away. People arrived in their swimming costumes, and bathed in the deeper pools, many paddled in the shallower water…I trudged along in wellingtons, a jumper and a thick rain coat…much to the confused looks of all the holidaymakers! I didn’t care…I continued walking into the river on the falls that I could get to, and tried to catch as much as I could on my way back. As the crowds built it got harder and harder, but I waited patiently where I could, and just took my time. This was my plan for today, and I was in no real hurry. River was also having a ball, completely in her element she was in and out of the water, laying down, swimming, and just shaking all the drips off constantly, and really seemed to enjoy this hike far more than any of the others. In all, it took me most of the day.

The numbers of different types of falls, surprised me. They weren’t all gentle bubbling brook ones, some were high and thin, some came from different angles towards themselves, crashing down in one big mass of water, one came down so tidily, that the flow away was crystal clear, showing the rock formations, and colours clearly. Others were full on bubbling masses of water over the boulders. The variations were striking every time! This is a photographers dream for sure, and the challenges varied with each and every fall. Some were very easy and obvious shots, some only had one spot you could shoot from, but several others offered a few options if you felt a little adventurous. 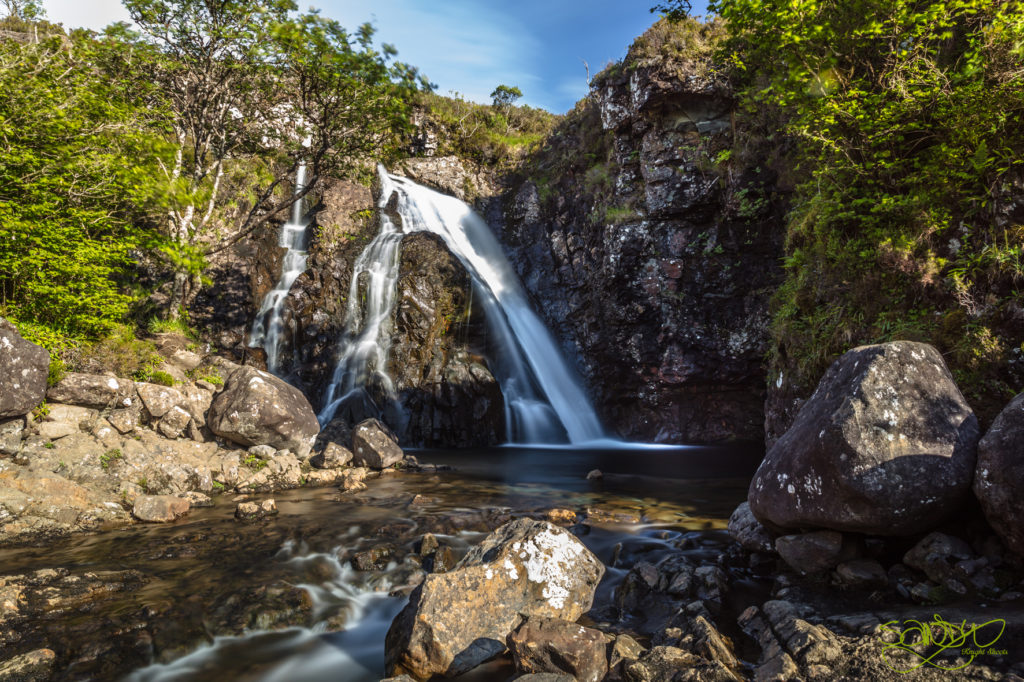 One such fall was towards the beginning of the walk (or towards the end as I was making my way back to the start in my case). I noticed this one because of the photographer that had stood there earlier in the day. As I got back to it, I wondered how he HAD actually gotten to his position, and feeling brave, decided to climb down towards the river to get a closer look. As luck would have it, having wellingtons on helped massively, because I was able to navigate across the river, and get across to the other side after all. Round here I was able to walk back to the waterfall the man had been photographing, and I couldn’t help but fall in love with the location. It just felt SO calm and peaceful, and almost like I had a private little glen to myself. No-one else was here, and during the time I spent here, only one other couple ventured across. The light by now was very harsh, and it was really difficult to get a shot I was happy with, but I spent some time trying nonetheless. The atmosphere here was just so gorgeous, I didn’t really want to leave, and River obviously felt much the same, as she was just content to lay in the grass, sunning herself. I must find out when the light is at its best for this secluded spot, and try again… well any excuse really will do! I suspect, in times of heavy rain or snow melting, crossing the river will be MUCH harder so maybe I should just rejoice in my luck on this day, and remember the joy and peace I felt at this spot.

I eventually got back to the bottom towards the evening, and ended up shooting the twin falls at the start of the walk. These seem to get overlooked a lot, and yet they are so very pretty. I guess most people aim for the main walk at the start of their walk, and by the time they get back here, they are a bit waterfalled out! This should have been a pretty easy and straightforward shot, but I didn’t bargain on the famed midges coming out to play, and battled them terribly, as they tickled every exposed bit of skin I had in their attempts to land and have their meal for the night! I snapped quickly, and ended up pretty much running from the spot. Next time, I will try this shot earlier in the day, or at a different season!! 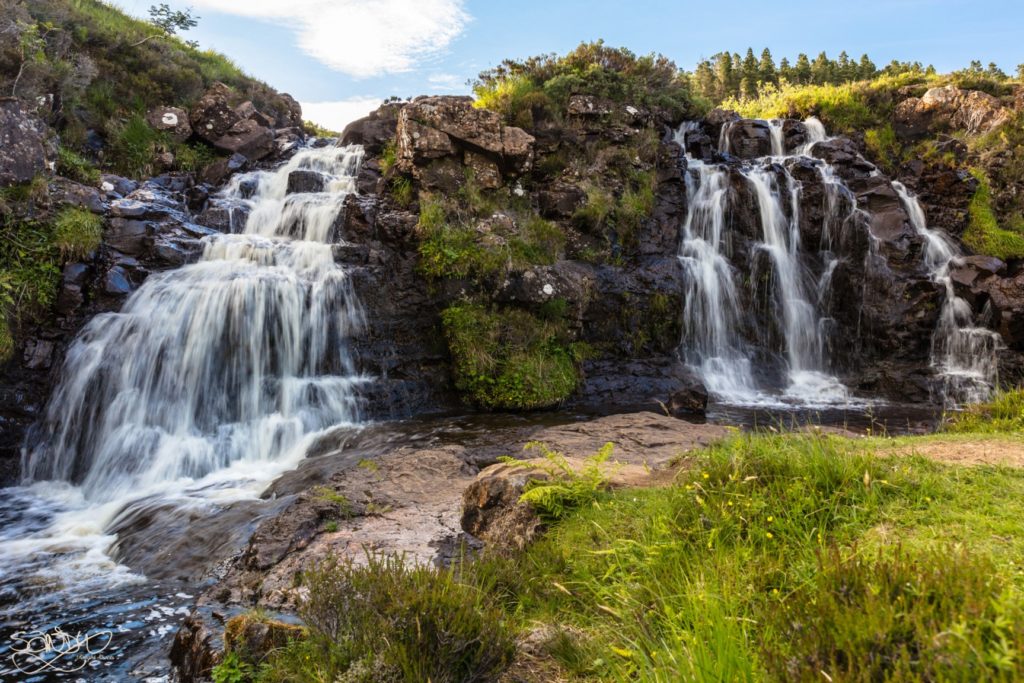 As a first serious scouting of the area however, I could see lots of potential at many of the spots I shot, and I could see a lot of learning curves, on where I went wrong. One of my biggest issues ended up being that stark, strong sunlight, which pretty much whited most of the falls out, and my skill set struggled to work out how to take the photos to show them to their best. I was over the moon, however, to see one of my best shots to date come out this walk, highlighting to me where my photographic learning is progressing.

I cant wait to go back!!