Ahhh, I love this place… aaaaand so does every tourist, photographer and hiker that come to Skye. In fact its so well photographed that its pretty impossible for anyone to miss this place, especially considering… oh, wait… did I just drive through it???

Thus was my first experience of Sligachan.

Unbelievably, for such an amazing location there’s very little here to spoil it or point it out noticeably… well apart from the HUGE number of tourists. There’s literally, just a hotel, a small camp site and something just back off the road near a small car park- and that’s it. The route to most locations I visited took me through here several times however, so I afforded myself several stops over the week, (to try and capture the quieter moments) and rather than post multiple times, I will pop them all together in one.

My first proper stop here, other than a quick scouting trip where I just got frustrated with people, was after I had finished breaking my leg, camera and spirit at Brides Veil Falls. I decided that I deserved a proper night at a campsite, a decent shower and some alcohol (which I tend to avoid on these trips, as I drive so late into the evening and early in the morning) I got to the campsite, asked availability, and was pleased to find that there were several spaces free. I didnt need any electric hook up, and the price, including free showers, was very reasonable, so I found a nice pitch, and settled in. I had hoped for a meal cooked for me this night, but the hotel was hosting a wedding, so both the bar and restaurant were closed for the private function sadly. Instead, I cooked a simple, quick, one pot meal, then went for a nice wander to chill out from my days upsets, and to get some ideas for the morning. I planned to be out well before the tourists arrived, and since it was midsummer, that meant I had a good few hours that would work for me from 5 or 6am if I chose, as people started arriving around 8 am here. I wandered up the river a little but soon got caught in boggy ground with my casual slip on shoes, so abandoned the walk up that way. I did get some nice ideas however, and seeing that there was little likelihood of there being a nice sunset, I headed back to the campsite, to have a shower, some wine, and a wonderful early night. 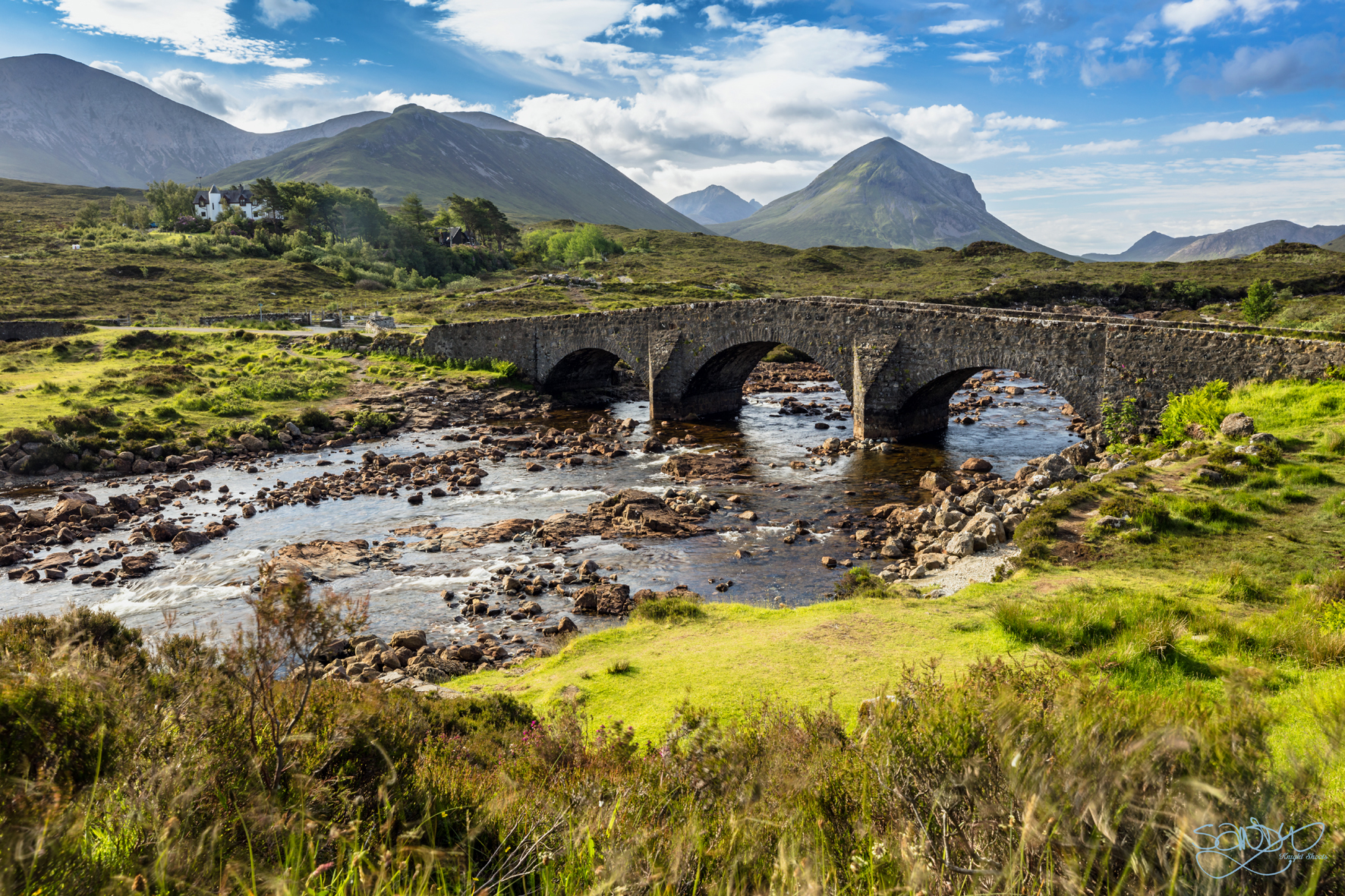 As I got back towards the hotel, I was stopped by two American women asking if this was the place of ‘the legend’. I had no idea, so they walked away to the hotel to ask someone there. As I wandered around the bridges one last time, they came back to me, and happily informed me that it was. On my blank expression, they explained that they had come all the way from the USA to Skye specially to fulfil the instructions in the legend…that if you dip your face into the water under the bridge for seven seconds, you will be blessed with eternal beauty. To be fair, they both clearly had a really good head start on that one, but fascinated I watched them make their way down to the waters edge, and cheered them on from the new bridge, as each in turn, did indeed lean forward on their bellies, and hold their faces in the cold flowing waters under the old Sligachan bridge.

Its a sweet legend now I have read it, of a mighty warrior, a daughter whose tears reached the fairies at this place, and of how they granted her a wish to save her mother – go look it up before you go, its well worth the read before your visit. Next time I am here I may give the face dipping a go – you never know – it might reverse time a bit…!!!

I woke in the morning fully refreshed and raring to go, being at the (people free) bridge easily, by 7am. My first visit here, and the walk last night, had me mildly concerned about the hill right behind the Old Bridge. On both occasions the light had been directly on the hill making it look a little flat, and rather bland to my eyes, and my fear was that it would look like that today too… but I needn’t have worried. Today I was blessed with a bit of cloud cover to the left, that cast a nice shadow over the hill peak, giving it a bit of life. I snapped photos eagerly from this side while it was there, then moved around to some other positions as it cleared, leaving the hill flat again. This shot ended up one of my favourites, even though it’s probably the spot most photographers use… 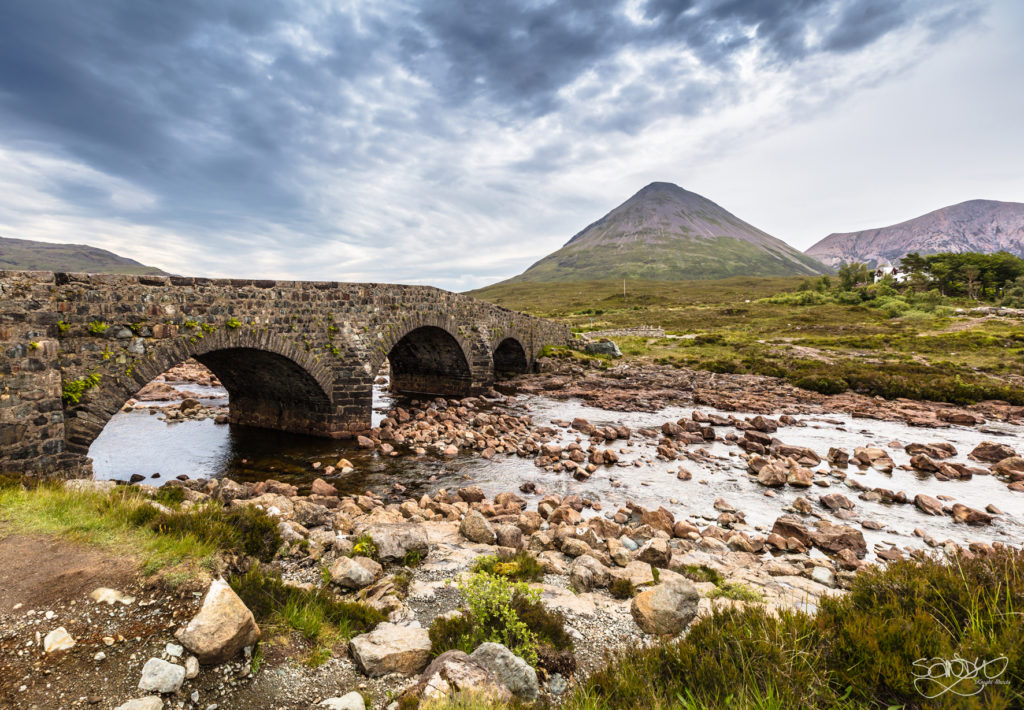 As I was on the opposite bank, I met with another photographer, Thomas. For a while we worked together, chatted about our work, kit, and offered tips or suggestions to each other. He was really interesting to chat to, preferring black and white pictures, which is different to those I take. He spoke to me about the use of tone, and the difference it made in how he looked at a picture. “For colour photography, sunrise and sunset are the best times ” he said “because the colours are so beautiful. For the middle of the day, it can get quite hard though, and that’s when I think black and white can work well. You aren’t looking for colour, you are looking for tone instead”. He went on to explain what helps for a tonal photograph, and it felt that I was being given a valuable and worthwhile tutorial. I was also fascinated to hear, and see the results of, his recent trip to Norway on a photographic trip with a guide. “The guide knew lots of secret and quiet spots, and the best time to visit them” he explained. This is a dream trip of mine, and his shots were amazing, making me feel desperate to do one of these!… sounds like I really need to get saving, or finding funding of some sort, if I ever hope to fulfil this dream though… it wasn’t cheap!

I considered Thomas’s photography to be considerably better than mine, and have since looked at all of his galleries on the internet as a source of inspiration, so I was quite pleased when, after following me to a spot I had hunkered down in, he declared “Oh this is a fantastic spot, you have found the best one yet!” (Featured image at top) It helped me feel that I could do something right to please a real ‘pro’! As we took photos here, the first tourist bus arrived, so he decided to finish, having achieved the shots he wanted, and the site was getting more and more populated. I too started packing down shortly afterwards, when I was joined by another man, Bucko, who was clearly video blogging. This looked interesting, so we chatted about that, about photography, and a number of other things for quite a while, continuing to chat as we both left and wandered back to our retrospective vehicles… we swapped Instagram details, and we have been following each other and chatting occasionally, ever since. This is such a nice way to meet new friends!

A few days later, another new friend (met on the Old Man of Stor adventure) told me of another location very near Sligachan, with a lone white house, the river and the mountain as a backdrop. It sounded really pretty….but I never found it. I have since seen other photos of it, and now think I know where it is, but this will be a site for another day…. however, I did try to find it. On the way I found Sligachan falls. How I missed this on my scouting trip I have no idea, as its a very short walk from the photo above! The main route through Sligachan is the A87, but at the hotel, it forks onto the A863 (the turning to the left if you are standing with the bridges behind you) After a short walk up here, you will see a foot path to your left, and this takes you directly to the falls…do go, you will not be disappointed!!

The view when I got there was gorgeous, and as luck would have it, the Black Cullin mountains were clear of cloud cover enough to afford some nice dramatic shots without obscuring its impressive shape. I was in love with this view, and could have stayed much longer! River, however, was trying her hardest to get down to the water, but there was no obvious way down from this side. She had my heart stop several times when it looked like she might actually try and jump off the steep edge. Eventually for her safety more than anything, I decided that I had enough shots, and should leave before she managed to leap off ! 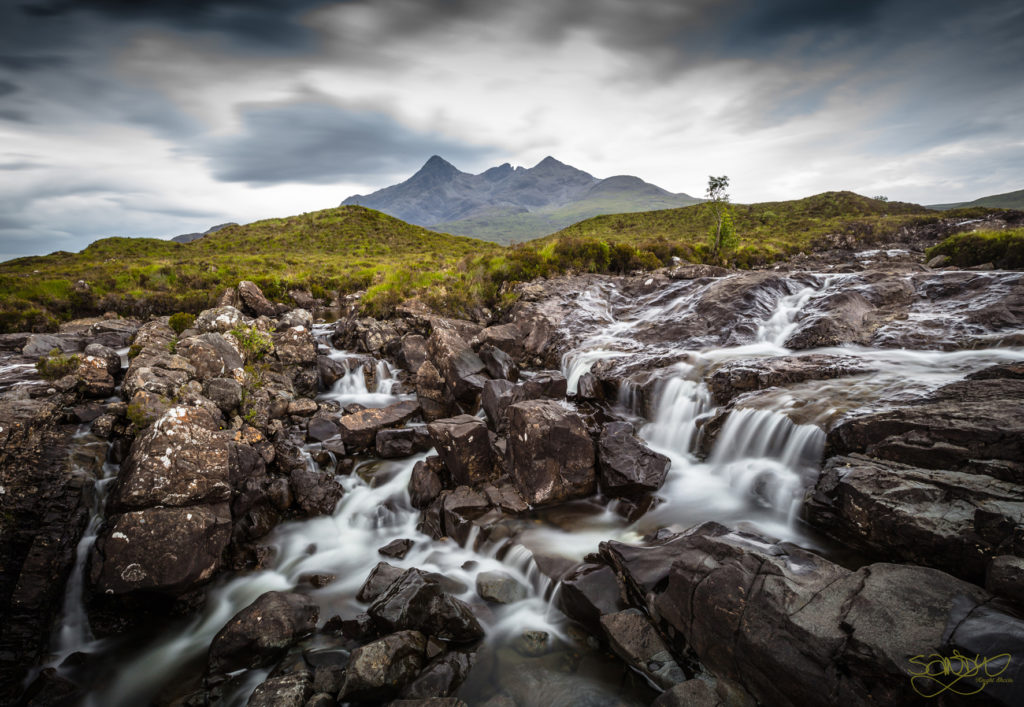 (Update)…I have since discovered that its pronounced Schleeg-a-chan… ch pronounced as in loch…just so you know!

(Second update)…I found the white cottage on a second visit in Jan 2020… just a bit further up from the falls, and down a small private road. Very easy to get to, and quite a classic shot!