Talisker was a classic example of my own inept skills at planning, and because of this, it ended up a highly disappointing evening at the time. After a fantastic day at the Fairy pools, I planned to come here for a sunset, on what appeared to be the only likely evening where I might have a chance at a good, red one. I had seen some online photos that showed a really lovely beach, with lovely features in the sands, an interesting sea stack, a waterfall, and basically a lovely vista well worth going to photograph, so teamed with a red sky, it may be a dream shot…In itself not a terribly bad plan I thought!

The drive over was a very pleasant one, and according to google maps there was a car park nearby to make everything easy. Well, I have no idea where this might be, because there was no car park to be seen, and I ended up at the bottom of a small dead end road looking around at signs telling me there was private property here, there, and over there.  I gather from the signage, that people parking here are a nuisance. Another sign pointed me to a beach…but it was clear there was no road going any further. After a look around, I squeezed my camper into a small space where maybe 3 cars might park safely without annoying the folks living there too much, picked up my kit, River, and we began the hike in the direction the beach arrow was pointing. I was a little concerned as to how far there was still to go, and felt I may have missed my opportunity as it was quite late in the day, but after a short hike which took me through woodland, through someones front garden (!!), and past a big field with sheep in it, the route opened itself up to the bay just as the golden hour was in its final half hour.

This is when I realised my bad timing.

There was no beach to be seen anywhere, and access to the waterfall was completely impossible. The lovely patterns in the sand were gone…and I was faced with a beach full of boulders. Heafty ones some of them too. I just stood looking at the scene feeling really disappointed in myself. Eventually I clambered over the boulders, and found a position closer to the water, and tried what I could with my camera. With limited viewpoints, everything I tried was just half hearted though, and after the golden hour, even the sun didnt seem to want to give me the hoped for glorious sunset, with the light slowly fading, and the blue increasing.

It was pretty, and just sitting watching the sun change through all the shades as the blue hour approached was very calming. River didnt seem interested in taking a dip, so we basically just sat there, watching, and soaking up the peace. Such a difference to the evening a few nights ago at Duntulm! Another couple drifted in walked along the edge, and disappeared again, but apart from them, the beach was entirely empty.

Eventually I resigned myself to the fact the sky wasnt going to light up, and I packed everything up, turned my back and started to walk off. River plodded silently next to me, and as I neared the edges of the boulders I took one last look before joining back onto the path that led back to the camper.

Yep… you guessed it… behind my back the sky suddenly given one last effort, and had lit up. It was only briefly, and by the time I got my camera and tripod back out, there was only a little left..but I managed to capture a little that was still in the east. I missed completely the stunning red I had first glanced. 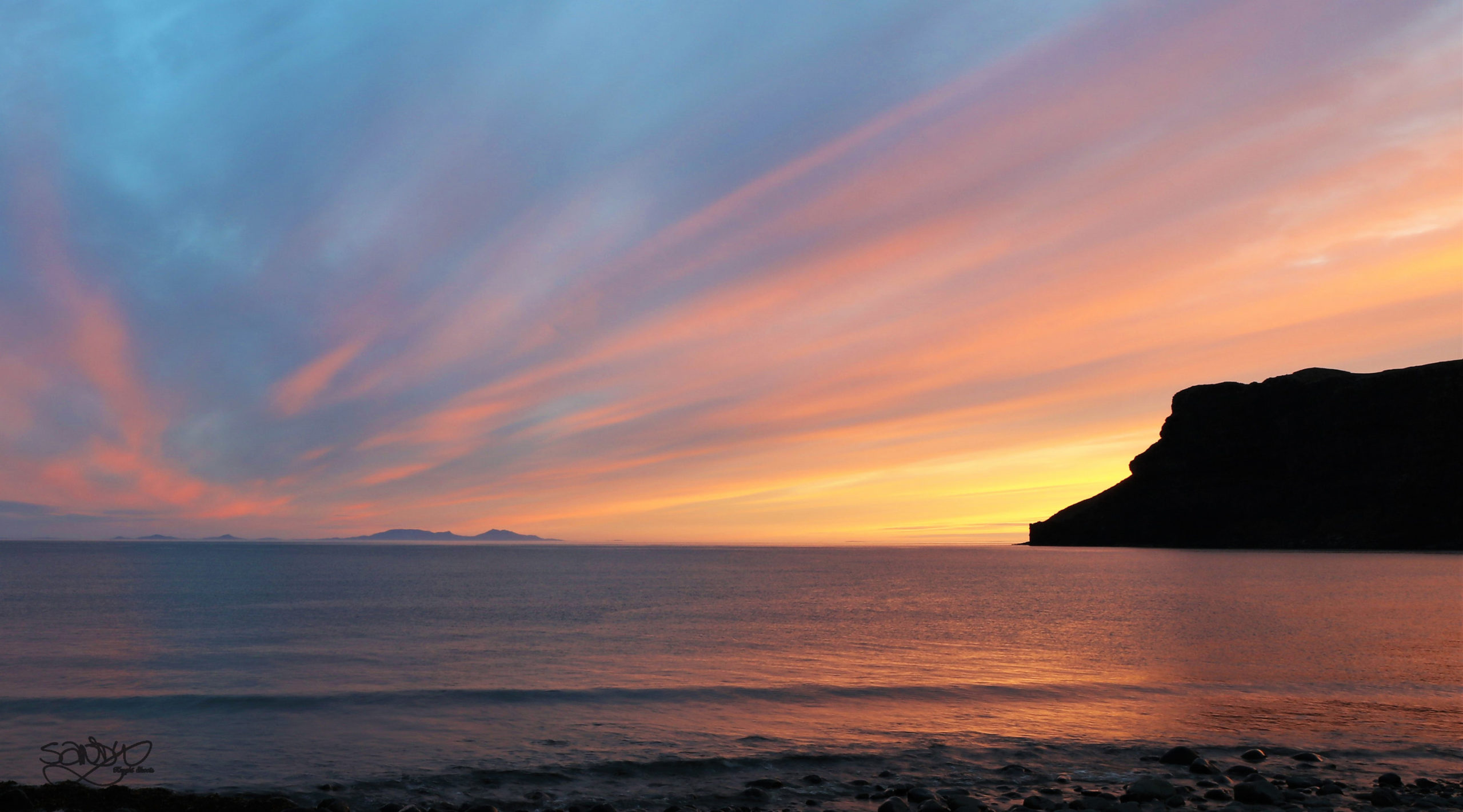 Not the dream shot I hoped for, but its enough to remind me of several things. Firstly. Dont go until you are SURE the sunset is fully over (!) Secondly, (this one was very much in hindsight) and more importantly, sometimes, just sitting, and not taking a photo isnt a bad thing. Soaking up the atmosphere is often a much better option, less stressful, and amazingly good for the soul! This evening was still beautiful, peaceful, and amazingly calming – it just wasnt picturesque in the way I hoped. Why on earth did I try to force it? I have clearly developed a bad habit of pressuring myself to take a picture, Take A Picture, TAKE A PICTURE!!!…and sometimes, I should just take in the scene. I forgot to remind myself this was mostly a trip to see what was here…the importance of ‘getting THAT shot’ should have been the least important aspect. To this day its a bad habit and one I really need to pull back on, bacause all it effectively does is put pressure on myself which hampers everything.

I actually left feeling disappointed, and sad… how stupid of me to do that to myself!